Discover Neuf-Brisach, a fortified town. Enjoy your time by mixing together history and a stroll all around the fortifications. You can visit this incredible architectural heritage, his fortified towers, his gates and his military courtyard… still intact.

NEUF-BRISACH can be discovered during a guided tour or without a guide, with the tour arounds of the city and its fortifications. 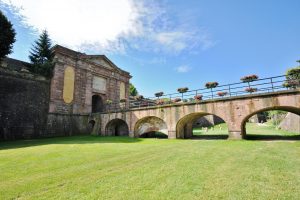 I wish to participate in a guided tour
For groups 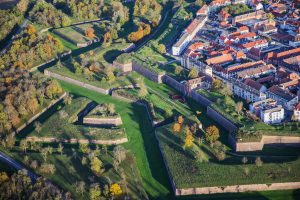 The masterpiece of Vauban

In 1661, Louis XIV realized the strategic importance that had Breisach am Rhein (Germany). That’s why he decided to build inside of that town, that had a direct link to the Rhine, an operation basis for the French armies, so they could pursue the war on the other side of the Rhine and farther.

In 1664, Breisach belongs to the French territory.

Vauban repairs, refurbishes and upgrades the city which stayed on the French territory until the treaty of Ryswick in 1697, where the King Louis XIV had to give back Breisach to Austria against his will.

Since that major loss, the King Louis XIV commanded Vauban in 1698 to find a place to build something big enough to be a threat for Breisach.

After a while of hesitation, Vauban decided building between Volgelsheim and Wolfgantzen, far enough to be out of the canon firing line coming from Breisach.

The 6th of September 1698, the King accepted that project which had a global cost estimated around 4 Million Pounds, that’s the equivalent of the annual budget spent on all the rest of construction in the Kingdom.

The city has been equipped and invested in. Those combats were brutal, over 6000 bombshells landed on this city. Neuf-Brisach was the most affected town of all fortifications in the Est. In only five years, up to 75% of the city has been reconstructed and it went through some improvement and modifications.

Far away from the battlefront of the First World War, Neuf-Brisach was luckily out of danger and has not suffered from any destruction. In 1918, the city became French again and got his initial strategic position back.

Around 1939, Neuf-Brisach was situated in the operation zone in the Maginot Line. The whole town had to be evacuated. The city was occupied by the Germans since 1940. They made a prison camp out of Neuf-Brisach, where over 40 000 French soldiers were imprisoned.

In 1945, wrong information was given to the US army, they though that Germans would still occupy the city, that’s why they bombarded it, even though the Germans were already gone. Over 85% of Neuf-Brisach was destructed, but fortunately the fortifications were not hit and are still intact.